CLV (previously Clover Finance) is a Layer 1 Blockchain, a smart contract platform, a multi-chain DeFi hub, and a cross-chain wallet.

CLV (previously Clover Finance) is a Substrate-based, Ethereum virtual machine (EVM) compatible blockchain infrastructure platform, focused on multi-chain and cross-chain compatibility for DeFi applications and interoperability between different blockchains.It was built as a blockchain operating systemand has a layer 1 blockchain, a smart contract platform, a multi-chain DeFi hub, and a cross-chain wallet.The network contains a storage layer, a smart contract layer, a DeFi protocol layer, and an eApp (external application, an evolution of dApps) layer.

CLV's infrastructure layer was started in May 2020, with its mainnet launched in July 2021. In February 2021, CLV announced a $3 million raise with support from Polychain, Hypersphere, Bithumb Global, and Divergence Ventures. The company is also backed by Alameda Research, Huobi, and OKex’s Ventures Arm. Clover Finance won Polkadot's fifth auction with 9,752,487 DOT raised in December 2021.

CLV was founded in 2020 by Viven Kirby, Burak Keçeli, and Norelle Ng. The company was originally Clover Finance and rebranded as CLV on March 10, 2022, stating that CLV stands for Connectivity, Legible, Versatile.

The CLV Chain is a Substrate-based specialized layer 1 chain that is EVM compatible and cross-chain interoperable. Its infrastructure is made for scaling dApps in the multi-chain universe. The CLV Chain features a unique dual-blockchain structure—the CLV Mainnet is a governance and exchange chain and the CLV Parachain is a contract chain that is EVM compatible. Both blockchains are validated and secured by the Substrate framework.

CLV incentivizes dApp builders by automatically sharing a percentage of the transaction fees with them. The redistribution of fees is designed to promote a vibrant developer community and foster an innovative DeFi ecosystem on Sakura and CLV. CLV reinvented "feeconomics" to simplify the DeFi user experience. CLV’s smart relayer will act on behalf of the sender so that relayers can cover gas fees with the same token from the amount users transact, without depending on a base currency like ETH. Transaction fees will be deducted automatically from the asset the user is transacting with. CLV’s Dynamic Fee Schedule is a brand-new gas calculation method that allows CLV users to get gas discounts proportionally to the frequency of their network activity. Users with less interaction pay more gas, and users with more interactions will pay less gas over time according to a usage curve.

The CLV Wallet is a non-custodial, multi-chain, multi-platform application that helps users manage crypto assets and interact with all types of dApps. The CLV Wallet is available as a mobile wallet on Android and iOS, as a Chrome extension wallet, and universally on the web. The CLV Wallet is a cross-chain, all-in-one wallet designed for everyday use, including DeFi, metaverse, and gaming purposes. It supports EVM chains and Substrate-based chains on Polkadot and Kusama, Solana.

CLV comes with various open-source wallet implementations for interacting with cross-chain dApps without navigating between Polkadot-based and Ethereum-based networks. Users can seamlessly send, receive, wrap, and unwrap cross-chain assets across Ethereum and Polkadot trustlessly. With the CLV Wallet, users can simultaneously connect with EVM-based dApps, PolkadotJs-based dApps, Solana dApps, and Tron dApps without having to switch networks.

$CLV is the native token of CLV Chain and is used for staking to take part in network consensus, transaction fees, platform rewards, and network governance. In February 2021, CLV was listed as one of the CoinList Seed Winter 2021 alumni and held the initial token offering event on CoinList in April 2021. $CLV is available to trade on all major exchanges, including Binance, Coinbase, FTX, Huobi, OKEx, KuCoin, Bithumb Global, Gate.io, and MEXC. It has 260,975,397 in circulation as of April 21, 2022, with a max supply of 1,000,000,000.

• as an ERC20 token on Ethereum Mainnet

• as a Substrate Native token on CLV Mainnet

• as an EVM Native token on CLV Parachain

CLV is a one-stop infrastructure platform for cross-chain and decentralized applications (dApps). The CLV chain is a Substrate-based specialized layer 1 chain that is EVM compatible, cross-chain interoperable, and also functions as a Parachain in the Polkadot ecosystem. The infrastructure is made ready for scaling dApps in the multi-chain universe. 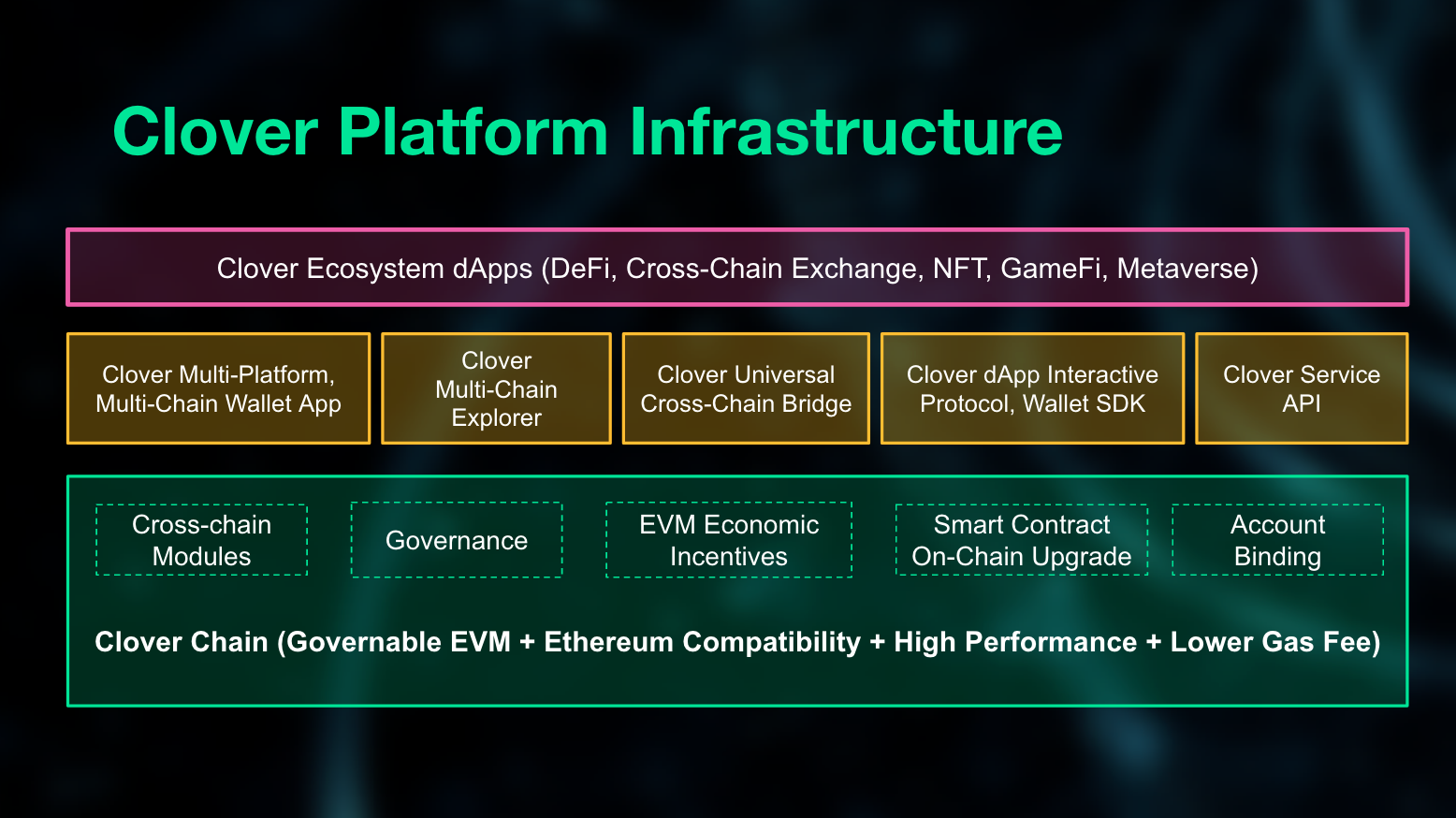 CLOVER REWARDS DISTRIBUTED (WHERE ARE THEY?) - Polkadot Parachain Crowdloan