Buy Now, Pay Later is a service provided by companies extending credit facilities to consumers and enabling them to purchase items in monthly payments.

Buy now, pay later (BNPL) plans are similar to layaway plans, often called point-of-sale loans, which allow shoppers to break their purchase into equal installment payments. Unlike layaway plans, BNPL does not put purchases aside until they are paid off; instead, BNPL plans allow users to receive their purchased items before payments are finished. Many BNPL service providers offer their services on purchases over $100, although some offer BNPL services on lower-cost purchases and tend to cap their services between $1000 to $2000 to standard customers. Unlike some retailer financing options, which seem similar to BNPL services, customers using BNPL services do not need to sign up for a credit card or any other type of service. 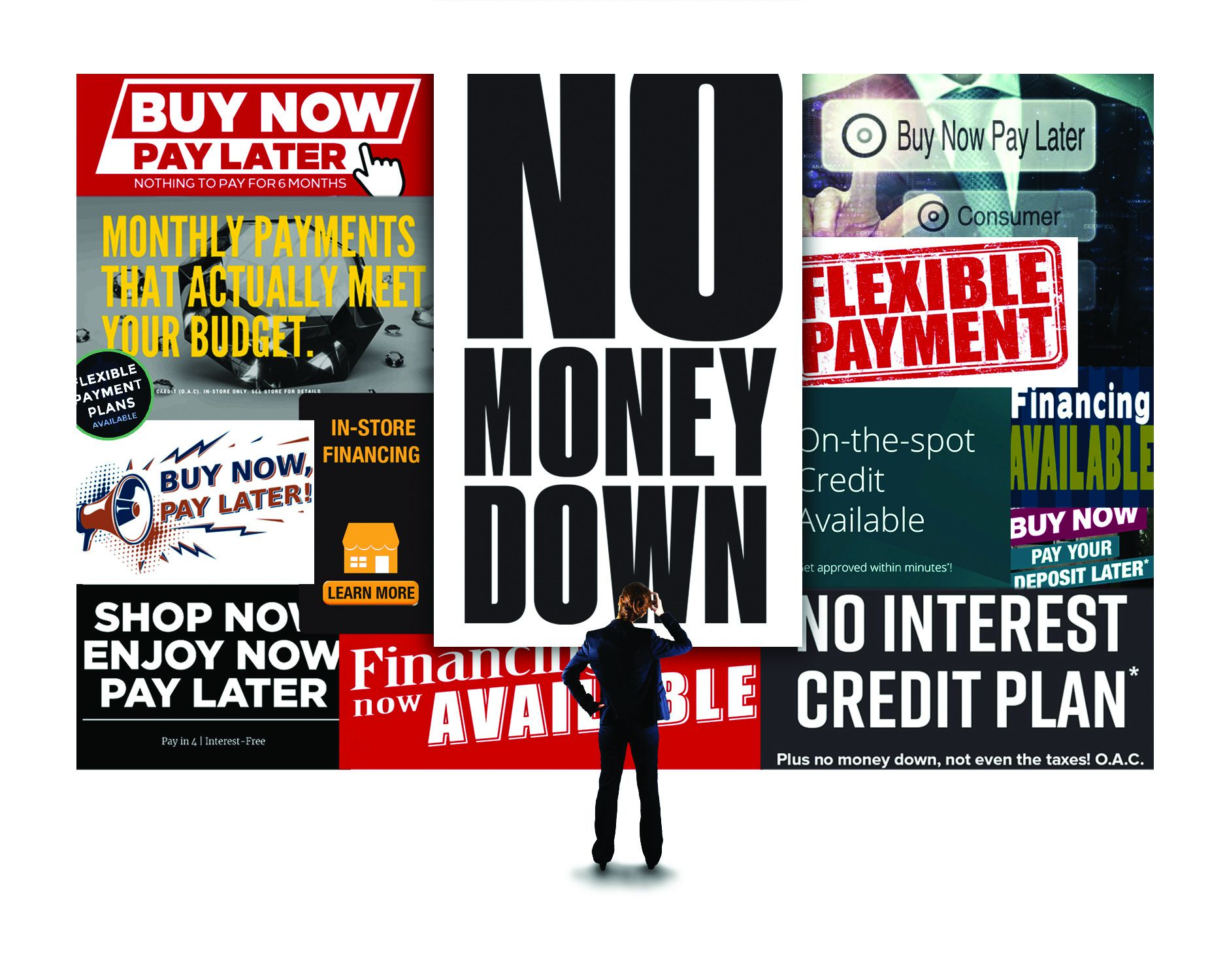 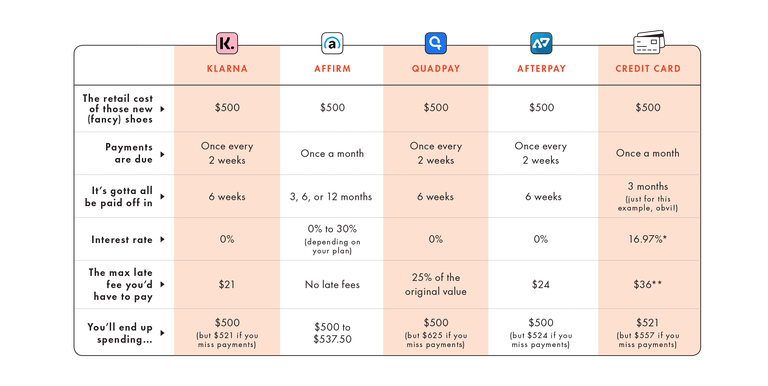 In the Gen Z and millennial generations, there is a reported increase in concern over the use of credit cards relative to previous generations, with interest payments and hidden fees being identified as points of concern. A study related to this has found that 42 percent of Gen Z and 69 percent of millennial shoppers are more likely to purchase items through a BNPL service if offered. And, as part of these studies, most say they use the services to buy something outside of their budget while avoiding paying credit card interest. As well, BNPL services offer consumers without access to credit facilities the chance to purchase items they do not necessarily have the capital for. However, that also means those consumers are more at risk for defaulting or making late payments and incurring fees and interest charges. 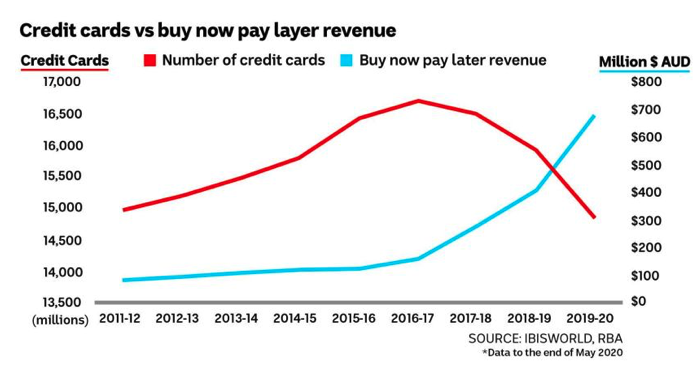 Graph exploring the change in use of credit cards versus buy now, pay later services in Australia.

In response to this, credit card providers including American Express, Citigroup, JP Morgan Chase, Visa, Mastercard, and PayPal have introduced new plans to be part of the buy now, pay later service market. Most of these plans are post-purchase plans which allow consumers to split a purchase of, generally, greater than $100 value into equal monthly interest-free payments.

These include PayPal's Pay in 4 and Pay in 3 plans which allow users to pay through a PayPal account and turn their payments into installments. American Express introduced their "Plan It" service to its United States cardholders, which allows those to split up purchases of $100 or more into equal monthly payments for up to twenty four months with no interest. The service has seen 5.5 million plans created worth more than $4 billion since introduction. The average plan size is $815. Similar to American Express' Plan It service, Chase introduced My Chase Plan that accepts equal monthly payments on purchases over $100 with a fixed monthly fee and no interest.

For consumers, BNPL services offer a chance to purchase an item or product outside of their budget while avoiding paying credit card interest. For consumers without access to credit facilities, BNPL represents an opportunity to purchase an item they may otherwise be unable to afford. Most BNPL services are easy to acquire for consumers, in that they require enough personal information for a credit check and a fraud check and are approved almost instantly. The services do not require any kind of credit card sign up and do not charge hidden fees. And prolonged use of an account with a BNPL service provider with a good repayment history can increase the possible purchase limit provided by the company to the consumer.

For merchants, many of these accounts with BNPL service providers represent an opportunity to push promotional and marketing material through the BNPL service provider. Studies have found 42 percent of Gen Z and 69 percent of millennial shoppers are more likely to purchase something outside of their budget if a BNPL service is offered. For merchants providing BNPL solutions, there has been reported up to a 30 percent increase in customer conversions. Similarly, companies using BNPL services have found that the services have brought younger consumers and increased the average order amount. Shoppers have reported that businesses offering BNPL services is either somewhat or very important in determining how much they spend during holidays.

Some BNPL integrations can also extend a merchant's services and products to cross-border consumers, allowing those shoppers to see the prices in local currency and regardless of location. In the case of these integrations, often the merchants do not have to pay currency conversion fees, which removes some of the heavy upfront costs associated with opening in new markets.

There are a few concerns around buy now, pay later services. While the service provider offers a way for consumers to avoid accumulating credit card debt, there is a concern that installment payments can still allow consumers to let their spending get ahead of their income.

Similar to this, since the companies offer services to those without access to credit facilities, they can put these individuals at greater risk of defaulting or making late payments and incurring fees and interest charges. For those in a low income situation or those working to rebuild their credit—if they default or making late payments with the BNPL service, the loan may be reported to credit bureaus and can affect credit scores. If the BNPL service reports to a credit bureau, the new account creates a new credit facility which in turn causes a drop in the user's credit score as it lowers the user's average credit rate.

In regards to the concerns around missed payments, Afterpay suggests that less than 1 percent of customers fall behind on payments. However, a 2020 study by Cornerstone Advisors found that 43 percent of those who used BNPL service were late with payments. Of those, 67 percent said the reason for falling behind was that they lost track of the payments, not because they did not have the money.

While consumers have concerns around the use of credit cards, BNPL lending programs are not subject to strong federal regulations. Depending on the region, these programs receive minimal and inconsistent oversight from federal and state bank regulators. In part because of this, some BNPL platforms were flagged in the United Kingdom by the Financial Conduct Authority (FCA) for encouraging consumers to accrue debt. The FCA published a ruling on February 2, 2021 which determined BNPL products should be brought within regulatory oversight urgently.

Previous to 1958, when Bank of America launched their BankAmericard, eventually renamed Visa, the way to purchase products which were out of reach financially was through layaway. In layaway, a product would be held from the customer until payment installments were made. Buy now, pay later is a newer version of these systems made viable through the increased consumer use of e-commerce over physical commerce. Affirm, one of the earliest and most recognizable of the BNPL service providers, was founded in 2012, while Klarna, another recognizable BNPL service provider, was founded in 2014. These represent an emergence point for buy now, pay later service providers. Although adoption was initially slow, from 2018 to 2019 the use of BNPL service providers surged by 162 percent.

During 2020 and the COVID-19 pandemic, which saw people in jurisdiction-specific lockdowns and stay-at-home orders, BNPL services in the United States accounted for $24 billion in purchases, while traditional credit card volume dropped. And, according to the Financial Conduct Authority in the United Kingdom, the use of BNPL platforms almost quadrupled in 2020 with five million people using the products since the beginning of the COVID-19 pandemic in the United Kingdom.

As of December 2020, Klarna said they had two million monthly active users through the year 2020. While Afterpay, in November 2020, had $1 billion of purchases through its services. The company also saw 13 million signed up users in the United States and 5.6 million active users with an average age of thirty three. As well, Peloton partnered with BNPL service provider Affirm to give customers the option of no-interest, no-fee installment plans for as long as thirty nine months. And, according to Affirm's IPO filing, Peloton purchases accounted for 28 percent of their revenue since the partnership.

With the increase in use of BNPL services, which are traditionally offered as online services, some BNPL service providers, such as Afterpay, are working to expand their offerings to in-store shoppers.

While the largest BNPL companies, by revenue and adoption—Klarna, Affirm, and Afterpay—are in Europe and North America, the expected region of large growth for BNPL service providers is Southeast Asia. This region has had low credit card adoption, in part because credit rating bureaus required by banks for dispersal of credit cards are not robust in the region as of 2020, and the culture of the region is debt-averse. The region has embraced zero-interest installments that feel the same as cash.

In Southeast Asia, credit card usage ranges from a few percent to 20 to 30 percent across most countries versus the 60 to 80 percent in Europe and North America. While there is low credit card adoption, BNPL companies Kredivo and Akulaku have over ten million installs of their apps on Google Play, and Hoolah (based in Singapore) grew its transaction volume by 1,500 percent during 2020. In the region, the average basket size is under $200. And, despite the lack of credit bureaus, the region's widespread use of digital wallets offers BNPL service providers a different, if equally rich, spending history to base their acceptance on.