Budva is a city in Montenegro, located in the central part of the Adriatic coast of the country. The city is the center of the municipal district of the same name. Budva was founded 2500 years ago, is one of the most ancient settlements on the shores of the Adriatic Sea.

Budva and its surroundings form the Budva Riviera — the largest tourist center of Montenegro, famous for its beaches, nightlife and beautiful examples of Mediterranean architecture.

There is a lot of archaeological evidence that the first settlements on the territory of Budva were in the V century BC. According to legend, the city was founded by the ancient Greek hero Cadmus of Phoenicia, who left the city of Thebes (central Greece) founded by him and found a haven here for himself and his wife Harmony. In Budva, indeed, there are historical monuments of two civilizations of the ancient Mediterranean — Ancient Greek and Roman. After the fall of the Roman Empire and its division into two parts, the dividing line between the emerging powers passed through Budva, which had a huge impact on the culture of this region. In the Middle Ages, Budva was ruled by Dukli kings, Serbian and Zeta feudal lords.

The Venetians ruled the city from 1420 to 1797. At that time, the city was called Budua and belonged to Venetian Albania. It was surrounded by impregnable walls that protected it from Turkish raids. The inhabitants of the city spoke the Venetian language until the XIX century. The city was small: the number of its inhabitants did not exceed a thousand.

In 1815-1867, Budva was part of the Austrian Empire, in 1867-1918 — the Austro-Hungarian Empire. After the First World War, Budva became part of the Kingdom of Serbs, Croats and Slovenes (since 1929 — the Kingdom of Yugoslavia). Since the mid-1930s, the city gradually began to develop as an international resort. In April 1941 it was occupied by fascist Italy. The Second World War claimed many human lives: more than half of the inhabitants of Budva died. The city was liberated from the Nazis on November 22, 1944. Since the 1970s and 1980s, Budva has acquired the status of a fashionable resort among Western European tourists. Since 2006, Budva has been part of the independent Republic of Montenegro.

On April 15, 1979, a powerful earthquake occurred, as a result of which a large part of the city was destroyed. But now there are practically no traces of what happened: all the buildings have been restored.

Budva County covers an area of 122 km2. The coastal strip is quickly replaced by a mountainous landscape. The mountains, consisting of sedimentary rocks, are covered with rare thorny bushes. The new town is located along the shores of a small bay. In the north, the bay ends with a cape on which the old fortress is located.Not far from Budva, within line of sight, is the island of St. Nikola, one of the few islands off the coast of Montenegro. The so-called Adriatic Highway (Jadran Way) passes through the city — a highway connecting numerous settlements in Greece, Albania, Montenegro, Bosnia, Croatia.

The climate in Budva is typical Mediterranean, with warm summers and mild winters. The average number of sunny days is 297 per year. Budva is one of the warmest cities in the Mediterranean: the average temperature in January is 8 °C, in July - 23.9 °C, the average summer temperature is 23.1 °C, winter - 9.3 °C. The sea water temperature rises to 24.7 °C in summer, and in autumn it is 18...19 °C. Relative humidity ranges from 63% in summer to 80% in autumn.

Budva is the center of the municipal district of the same name, which includes, in addition to Budva, such settlements as Boreti, Becici, Rafailovici, Przno, Sveti Stefan, Petrovac. The population of the district is 15909 people (according to the 2003 census), of which the population of Budva itself is 10918 people.The city's population is growing dynamically: for example, if in 1981 the city's population was 4,684 people, by 1991 it had increased to 7,178, and then over the decade it grew almost one and a half times. The ethnic composition of Budva is also undergoing significant changes: the share of Serbs among the urban population is growing rapidly.

The confessional composition of Budva is almost homogeneous: the vast majority of believers are Orthodox Christians. There are many Orthodox churches and monasteries in the city and its surroundings: Podostrog, Rejevichi, Stanevichi, Gradishte. The Catholic community of Budva also has a long history, there are still Catholic churches in the city, including the famous Cathedral of St. John the Baptist.

The basis of the city's economy is tourism. In addition to hotels and boarding houses, there are many apartments rented to tourists.

Budva is often called the capital of Montenegrin tourism: 250 thousand tourists visited the city in the summer of 2005 alone. These are mainly residents of Serbia and Russia, as well as Germany, Finland, etc. Tourists are attracted by the numerous beaches of the resort, the total length of which is 11.3 km, as well as many historical attractions.

In 2014, 754,567 tourists visited Budva, they spent 4.67 million nights in the city. Among the vacationers, the most numerous were guests from Russia. In total, 220,445 Russians visited the resort capital of Montenegro in 2014.

Most of the historical monuments are concentrated in the Old Town of Budva. Located on a peninsula that protrudes noticeably sharply into the sea, it is a corner of typical Venetian and Mediterranean architecture. Despite the devastating effects of the 1979 earthquake, by 1987 the Old Town was completely restored. The old City is surrounded by a powerful fortress wall and pierced by narrow winding streets that lead to the city citadel, where the museum is now located. There are three ancient churches near the citadel:

The Cathedral of St. John the Baptist (founded in the VII century, with subsequent reconstructions) with a bell tower — the architectural dominant of the old city;

The Church of St. Mary "in Punta" (built in 840) is the only surviving structure from the monastery that once existed here;

The Church of the Holy Trinity (built in 1804) is an Orthodox church built in a typical Byzantine style.

The Church of St. Sava is a small temple in Budva. It was built in 1141, in the current Old Town. According to legend, from the place where the church now stands, Saint Sava went on a pilgrimage to Jerusalem. This small temple * 15 m2* is built of hewn stone of gray and red colors. It adjoins the southern fortress wall, which it shares with the Church of St. Mary. Inside the church was painted with frescoes of the XII century, from which fragments have been preserved. Currently, the Church of St. Sava is not operating.

Historical monuments are also located in the vicinity of Budva. First of all, it is the beautifully preserved ensemble of Sveti Stefan, as well as Orthodox monasteries. 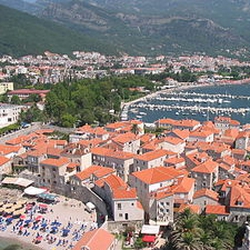