Charles Hardin Holley (September 7, 1936 - February 3, 1959), known as Buddy Holly, was an American singer and songwriter who was a central and pioneering figure of mid-1950s rock and roll. He was born in Lubbock, Texas, to a musical family during the Great Depression, and learned to play guitar and sing alongside his siblings. His style was inf...

Who was Buddy Holly?

Buddy Holly was one of the most influential singer-songwriters of the 1950s. His records conveyed a sense of ‘joie de vivre’ and carried South-Western intonation. Although he was not popular for most part of his life, his music had left an indelible impression in the rock and roll music scene, which was the most popular genre at that time. He was well-versed in a number of musical styles and had become a seasoned performer by the time of his death. Holly was a continuous innovator; he wrote his own music and was among the first to use unconventional studio methods, such as ‘double-tracking.’ During his final months, he also began experimenting with orchestration. His wide range of songs include ‘That’ll Be the Day,’ ‘Peggy Sue,’ and ‘Maybe Baby.’ Apart from music, he is also remembered for his signature horn-rimmed glasses. He deeply influenced ‘The Beatles’ and ‘Hollies.’ Even the ‘Rolling Stones’ had their first major hit with Holly’s ‘Not Fade Away.’ It is believed that he was one of the most important and earliest influences on popular musicians, including Bob Dylan, Eric Clapton, Elvis Costello, and Steve Winwood. 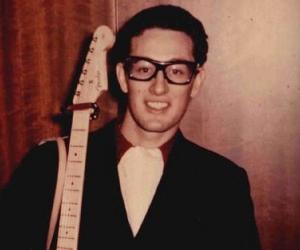 Inspired by Elvis Presley’s rockabilly style, Holly soon began to incorporate this style into his own music. He and his friends—Bob Montgomery and Larry Welborn—were later spotted by a Nashville talent lookout and they began recording tunes under the name ‘Buddy Holly and the Three Tunes.’

They officially signed their first record contract with ‘Decca Records.’ He then went on to form his own rock and roll band called ‘The Crickets’ in 1957. Holly was the lead guitarist and also the vocalist of the band.

Among the earliest tracks that the group recorded was ‘That’ll Be the Day’ in 1957. The song’s title was taken from a phrase that John Wayne frequently used in the film ‘The Searchers.’

In November 1957, the band released their debut album ‘The "Chirping" Crickets.’ Meanwhile, he signed a solo deal with ‘Coral Records,’ thus having two recording contracts at the same time.

Till 1958, Holly and ‘The Crickets’ recorded several singles that were featured on a number of famous music charts. He then moved to Greenwich Village in New York City.

In 1958, he released his solo debut self-titled album. One of the singles from the album, ‘Peggy Sue,’ charted in a number of popular countdowns. He then released ‘That’ll Be the Day,’ which turned out to be his last album.

Due to legal and monetary problems, caused upon the band’s disintegration, he unwillingly decided to tour through the Midwest in 1959 with ‘The Winter Dance Party.’ Annoyed with broken-down automobiles in subzero temperatures, he charted a private plane, which crashed shortly after the take-off, killing everyone on board. Buddy was just 22.

Buddy Holly was born in Lubbock.

Who was Buddy Holly? Everything You Need to Know

Who was Buddy Holly? Everything You Need to Know