BOYKIV REGION is a region in the middle part of the Ukrainian Carpathians.

Boykivshchyna is a historical and ethnographic region on the northern and southern slopes of the Carpathians, stretching from the rivers Limnytsia and Teresva (in the east) to the rivers Uzh and Xiang (in the west), covers mountainous areas of Lviv, Ivano-Frankivsk and Zakarpattia regions . Derived from the name of the population of the region - Boyks. 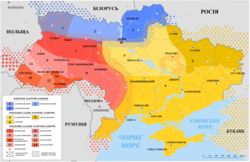 The historical Stryj region included a considerable part of the ethnographic Boykivshchyna, including Skole (the first written mention is in 1397). Skole has been known in our history since the Middle Ages. Many toponymics are connected with the tragic death of Prince Sviatoslav Volodymyrovych in 1015. These are Skole, Slavske, Sviatoslav's grave, and the Opir river. Rock monasteries near the villages of Rozgirche and Trukhaniv ("Dovbush Rocks"), as well as the remains of the Tustan fortress near the village of Urich, where the annual festival of medieval culture now takes place, are still preserved. 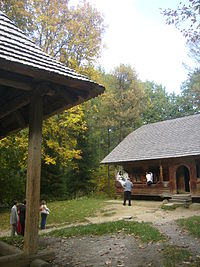 The main trade and military route from Ukraine to Hungary and Western Europe has long passed through Boykivshchyna.

In 1772–1918 Boykivshchyna was part of the Habsburg possessions (later the Austrian Empire and Austria-Hungary), in 1919–1939 - Poland. After the annexation of Western Ukraine in 1939 and Transcarpathia to the Ukrainian SSR in 1945, it became a part of the Ukrainian state.

Many famous figures were born in Boykivshchyna, including Hetman Petro Sagaidachny, Judge General of the Khmelnytsky Region Ivan Krekhovetsky, and writer Ivan Franko.

Ivan Vahylevych was the first Ukrainian researcher to determine the territory where the Boyks settled on the Carpathian Range between the upper reaches of the Xiang and Limnytsia rivers and the foothills in the north, and to study the material culture of Boykivshchyna. In 1839 he published a large article in the Czech journal "Boyki, the Russian-Slavic people in Galicia", which comprehensively and scientifically covers the history, life, territory of the settlement.

Ivan Franko dedicated a number of artistic, journalistic and scientific works to the history and culture of this region ("Ethnographic Expedition to Boykivshchyna", "Carpatho-Russian Literature" and others).

From 1934 to 1939, the Chronicle of Boykivshchyna was published in Sambor, a publication devoted to the study of the history, culture, and way of life of the ethnographic region. During the period of independence it started to be published again, but now in Drohobych.

"Boykiv Constellation" is a reference book by Natalia Klyashtorna, published in 2012. A dictionary with brief information about 300 prominent people whose origins, lives or activities are connected with the Boykos and the Boykiv land. There is also information about representatives of other ethnic groups and nationalities, each of whom helped the Boyks in their field, popularized their cultural heritage and in general contributed to the development of Boykivshchyna. The book became a first-degree graduate of the XVI Boykov Literary and Local History Competition named after Myron Utrysk on August 30, 2012 in Turkey.

Dictionary of dialects of the central Boykivshchyna

"Dictionary of dialects of the central Boykivshchyna" - contains words and stable phrases written down by Ukrainian philologist Mykola Matiiv in 32 villages of Lviv region for 28 years personally by interviewing old residents, representatives of younger and middle generations directly at their places of residence. 6450 words and 1768 stable units and samples of oral folk art are given.

Roman Reinfuss wrote a fundamental work on the floor. «Ze studiow nad kultura materialna Bojków». He outlined the boundaries of ethnographic Boykivshchyna, in particular on the most controversial in scientific circles - the western.

Proceedings of the International Historical and Ethnographic Seminar

Search on Google
Search on Bing
resource.history.org.ua...ry.exe
Is a