9 things to know about Bobby Jindal

In 1995, Jindal was appointed secretary of the Louisiana Department of Health and Hospitals.

Jindal first ran for governor of Louisiana in 2003, but narrowly lost in the run-off election to Democratic candidate Kathleen Blanco. In 2004, he was elected to the U.S. House of Representatives, becoming the second Indian American in Congress, and he was reelected in 2006. To date, he is the only Indian-American Republican to have ever served in Congress. Jindal ran for governor again in the 2007 election and won. Jindal was re-elected in 2011 in a landslide, winning more than 65 percent of the vote.[3][4] He was the first Indian American governor, and the only one until Nikki Haley was elected Governor of South Carolina in 2010.[5]

Piyush "Bobby" Jindal (born June 10, 1971)[1] is an American politician who served as the 55th Governor of Louisiana from 2008 to 2016 and is the only living former Louisiana governor. Jindal previously served as a member of the U.S. House of Representatives and Chairman of the Republican Governors Association.[2]

In 1995, Jindal was appointed secretary of the Louisiana Department of Health and Hospitals. 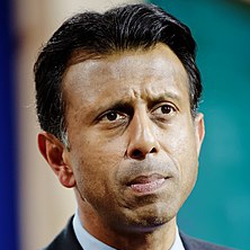