The production of light by certain enzyme-catalyzed reactions in cells.

It is assumed (American scientist W. D. McElroy et al., 1962) that B. arose at the stage of transition from anaerobic to aerobic forms of life, i.e. when oxygen began to accumulate in the original atmosphere of the Earth. Probably, oxygen was toxic for the anaerobic organisms that existed at that time, and organisms capable of quickly restoring it gained an advantage. At the same time, in some cases, the release of energy in light form was more profitable than in heat. In the simplest bioluminescent forms, the energy released by the oxidation of substrates was released in the form of light or heat, i.e. disappeared without benefit to the body. Therefore, in the course of further evolution, organisms gained an advantage, which had a mechanism of energy accumulation (see oxidative phosphorylation). With the appearance of such forms, oxidative luminescent reactions no longer gave advantages in natural selection and even became harmful. However, as a result of secondary evolutionary processes, B. could be preserved as a rudimentary trait in separate, unrelated groups of organisms, in which it acquired other functions, for example, the functions of the sexual signal in fireflies.

(Here FMN is the oxidized form of the fla-vinmonucleotide, FMN * H2 is its reduced form, E is the enzyme lutherase.) The bacteria emit green light with a maximum wavelength of about 560 nm. The most complex system of B. in insects, for example, fireflies. Their organs emit flashes of yellow-green light (approx.560 nm) caused by nerve impulses. In addition to luciferin and luciferase, for the reaction of B. insects need ATP (see Adenosine phosphoric acids) and magnesium. The energy released during the hydrolysis of ATP (see Bioenergetics), apparently, activates the luciferin-luciferase system and ensures the oxidation of luciferin with the emission of light. In the absence of ATP, this system does not work.

According to the degree of complexity, there are 3 systems of biological organisms. The simplest, consisting only of luciferin and luciferase, is available in Cypridina (this crustacean emits blue-green light with a max wavelength of 440-460 mi), in Argon fish, etc. The luminous system of bacteria is more complex. Here, in addition to luciferin and luciferase, there is also a long-chain aldehyde, i.e. a compound of the type

where R is a direct hydrocarbon chain containing from 7 to 14 carbon atoms. The simplified scheme of B.'s reactions in this case has a trace, the form:

BIOLUMINESCENCE (from bio... and luminescence), the visible glow of organisms associated with the processes of their vital activity; observed in several. dozens of species of bacteria, lower plants (fungi), some invertebrates (from protozoa to insects inclusive), fish (see insert, Table XXII). B. is more widespread among the inhabitants of the seas and oceans. Here, glowing organisms sometimes multiply in such numbers that they cause the glow of the sea. At mn. organisms (bacteria, protozoa, crustaceans, fungi, etc.) glow occurs constantly and continuously if there is oxygen in the environment. In others, B. occurs in separate outbreaks and is associated with living conditions (hunger, breeding season, etc.). Biological. the meaning of B. is different. For example, in luminous insects, B. flashes serve as a signal that allows males and females to find each other; in a number of deep-sea fish - for lighting and bait prey; in cuttlefish - for protection from predators (by ejecting a luminous liquid), etc. Many animals have complicated glow organs. In some cases, the source of the animal's B. is luminous symbiont bacteria (for example, the so-called independent glow of a number of fish). According to the mechanism, B. refers to chemoluminescence: the glow occurs during enzymatic oxidation by oxygen of the air is specific. substances of luciferins. Due to the chemical energy released in this case, a part of the luciferin molecules passes into an excited state, upon returning to the main. the state they emit light. Luciferins, as well as the enzymes (l u c and f e r a s) that catalyze their oxidation, are different in organisms of different species. For example, in bacteria, the flavin mononucleotide (riboflavin-5-phosphate), a coenzyme of the oxidite series, serves as luciferin.- it will restore. enzymes. A common property of all luciferins is the ability to produce intense fluorescence. Isolated into a crystal. luciferin can also be oxidized chemically, but at the same time, unlike enzymatic oxidation in the body, energy is released in the form of heat, not light quanta. 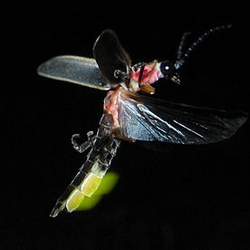 The production of light by certain enzyme-catalyzed reactions in cells.