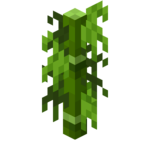 Bamboo items are eaten by pandas and can be used to speed up the growth of baby pandas. Bamboo can also be used to breed pandas when at least 8 blocks of bamboo are within 5 blocks of the pandas, making the panda the only animal in the game to have extra breeding requirements. At this point, the player can feed them bamboo and they mate to have a baby.

The appearance of bamboo changes as it grows. When first placed, it takes the form of a small shoot. When it grows one block taller it grows to 2 pixels in length and width and the top block has leaves coming off it. At 3 blocks, the top 2 blocks have leaves and at 4 blocks the bamboo expands to 3×3 pixels. At 5 blocks tall, the top 3 blocks have leaves on them. As the bamboo grows, the leaves move up and stay at the top 3 blocks. Destroying a block of bamboo does not change the appearance of the blocks below it. Bamboo is oriented at a random position in the block that it is in. Bamboo, grass, sweet berry bushes, and ferns are the only plants that change their hitboxes as they grow.

Bamboo can be used to craft sticks.

Bamboo as an item can be dropped by bamboo and planted to grow bamboo.