A credit card released by Apple in 2019 that works with the Apple Wallet application and allows users to make purchases using Apple Pay. 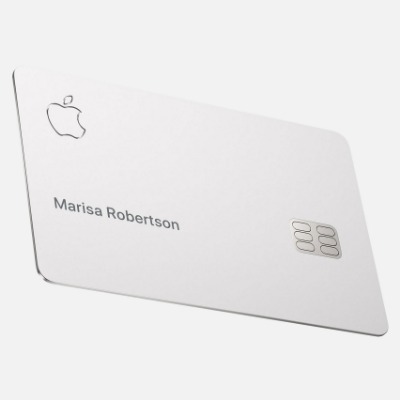 A credit card by Apple with no fees—no annual, cash-advance, over-the-limit, international, or late fees— thats gives Apple users the ability to sign up for Apple Card using the Apple Wallet application and make purchases through Apple Pay.

On March 25, 2019 during their keynote event Apple, in partnership with Goldman Sachs and Mastercard, announced Apple Card. A credit card by Apple with no fees—no annual, cash-advance, over-the-limit, international, or late fees— thats gives Apple users the ability to sign up for Apple Card using the Apple Wallet application.

The announcement came after Tim Cook claimed Apple Pay will surpass 10 billion transactions worldwide, and by the end of 2019 Apple pay is expected to be available in over 40 countries. Apple Card can be used for making purchases at any business accepting Apple pay; approximately 70% of business in the United States are currently accepting Apple Pay at the time of the announcement of Apple Card.

Every Apple Card is issued with a unique card number that is stored on the Secure Element (security chip) used by Apple Pay; and every Apple Card transaction requires Face ID or Touch ID authentication in combination with a one-time use dynamic security code. All data associated with Apple Card transactions is processed and stored locally on each users device so Apple (or third parties i.e Goldman Sachs or Mastercard) does not know where customers have shopped, purchased, or how much they have paid for products and services.

For situations where Apple Card users want to make purchases using Apple Card but Apple Pay is not available, Apple offers a physical Apple Card made out of titanium. The titanium Apple Card can be used like a regular credit card and has no card number, CVV security code, expiration date, or user signature. All information related to the cards transactions are processed and stored as if the customer was using their Apple Card through the Apple Pay wallet application.

Infobox
Is a
‌
Product
Founder