Anton Zeilinger is an Austrian physicist known for his contributions to quantum physics and the field of quantum information.

All edits by  Arthur Smalley 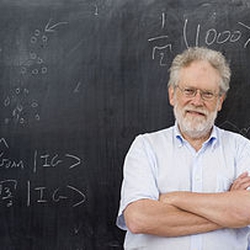 Anton Zeilinger is an Austrian physicist known for his contributions to quantum physics and the field of quantum information.

Anton Zeilinger is an Austrian quantum physicist known for his experimental and theoretical work on entanglement, most notably the realization of multi-particle entangled states, quantum teleportation, quantum communication and cryptography, photonic quantum computation, and matter-wave interferometry from neutrons to fullerenes, the latter investigating decoherence and the quantum-classical transition in detail. Zeilinger is a professor of Physics emeritus at the University of Vienna and a senior scientist at the Institute for Quantum Optics and Quantum Information of the Austrian Academy of Sciences. In 2022, Zeilinger was awarded the Nobel prize in physics for his work on quantum entangled states.

On October 4th, 2022, the Royal Swedish Academy of Sciences announced the 2022 Nobel prize in physics was awarded to John Clauser, Alain Aspect, and Anton Zeilinger for:

The three scientists had independently:

conducted groundbreaking experiments using entangled quantum states, where two particles behave like a single unit even when they are separated. Their results have cleared the way for new technology based upon quantum information.

Using refined tools and long series of experiments, Anton Zeilinger started to use entangled quantum states. Among other things, his research group has demonstrated a phenomenon called quantum teleportation, which makes it possible to move a quantum state from one particle to one at a distance.

The three scientists were selected “for experiments with entangled photons, establishing the violation of Bell inequalities and pioneering quantum information science.”

Anton Zeilinger completes a doctorate in physics at the University of Vienna.