"organic compound in which a hydroxyl group is bound to a carbon atom"
Alexander Perturabo edited on 10 Feb, 2022
Edits made to:
Description (+81 characters)
Article (+1914 characters) 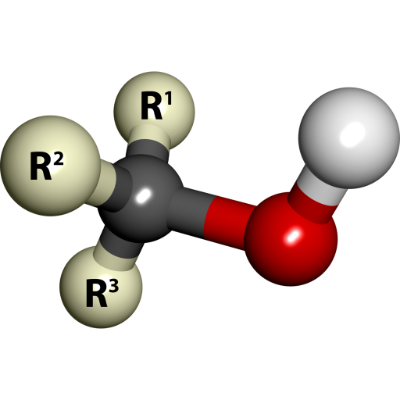 In chemistry, an alcohol is a type of organic compound that carries at least one hydroxyl functional group (−OH) bound to a saturated carbon atom. The term alcohol originally referred to the primary alcohol ethanol (ethyl alcohol), which is used as a drug and is the main alcohol present in alcoholic drinks. An important class of alcohols, of which methanol and ethanol are the simplest members, includes all compounds for which the general formula is CnH2n+1OH. Simple monoalcohols that are the subject of this article include primary (RCH2OH), secondary (R2CHOH) and tertiary (R3COH) alcohols.

The suffix -ol appears in the IUPAC chemical name of all substances where the hydroxyl group is the functional group with the highest priority. When a higher priority group is present in the compound, the prefix hydroxy- is used in its IUPAC name. The suffix -ol in non-IUPAC names (such as paracetamol or cholesterol) also typically indicates that the substance is an alcohol. However, many substances that contain hydroxyl functional groups (particularly sugars, such as glucose and sucrose) have names which include neither the suffix -ol, nor the prefix hydroxy-.

IUPAC nomenclature is used in scientific publications and where precise identification of the substance is important, especially in cases where the relative complexity of the molecule does not make such a systematic name unwieldy. In naming simple alcohols, the name of the alkane chain loses the terminal e and adds the suffix -ol, e.g., as in "ethanol" from the alkane chain name "ethane". When necessary, the position of the hydroxyl group is indicated by a number between the alkane name and the -ol: propan-1-ol for CH3CH2CH2OH, propan-2-ol for CH3CH(OH)CH3. If a higher priority group is present (such as an aldehyde, ketone, or carboxylic acid), then the prefix hydroxy-is used, e.g., as in 1-hydroxy-2-propanone (CH3C(O)CH2OH).

"Created via: Web app"
Alexander Perturabo created this topic on 10 Feb, 2022
Edits made to:
Infobox (+1 properties)