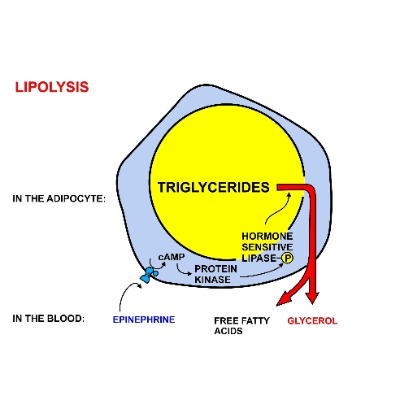 The size of adipose tissue is determined by dynamic changes in the turnover of adipocytes (also known as lipocytes, fat cells) and triacylglycerols (TGs), the major component of the adipocyte lipid droplet. Triacylglycerol is the correct chemical name for the lipid type commonly called triglyceride.

White adipose tissue (WAT) controls energy homeostasis by storing and releasing lipids in response to energy demands. To maintain metabolic homeostasis WAT stores energy in the form of TGs and releases fatty acids by lipolysis. Adipose tissue expands either by hypertrophy, which is enlargement of existing adipocytes or by hyperplasia (adipogenesis), which is the proliferation and differentiation of pre-adipocytes to adipocytes. The ‘adipose tissue expandability hypothesis’ postulates that a lack of hyperplasia together with a high prevalence of hypertrophic adipocytes results in limited capacity of WAT to expand and store fat, which can cause impaired metabolic health.

To measure WAT lipid turnover in vivo in humans, researchers in Sweden used 14C levels, which increased during nuclear bomb tests and dropped off following the Limited Nuclear Test Ban Treaty of 1963. Their work suggested that TGs are replaced about six times during an adipocyte lifespan. Obese individuals have been found to have higher TG storage and higher TG age relative to non-obese individuals, implying high storage and low removal of adipose TGs may be determinants of obesity.

Subsequent research by the Swedish team lead by Kirsty Spalding and Peter Arner showed that subcutaneous triglyceride age and storage capacity are increased in overweight or obese individuals. Visceral triglyceride age was found to be increased only in excessively obese individuals and was associated with a lower capacity to remove lipids. The group looked at visceral WAT (vWAT) and subcutaneous WAT (sWAT) in biopsies and found sWAT had a greater storage capacity for triglyceride. Only vWAT was found to be influenced by fat distribution where storage and removal of triglycerides were increased in subjects that showed visceral or upper body obesity, which may help explain why this pattern of fat accumulation is linked to metabolic complications.

"Initial topic creation"
Dawson Sewell created this topic on 24 Sep, 2019
Edits made to: