Located in Indonesia, it was the largest recorded volcanic eruption in human history. 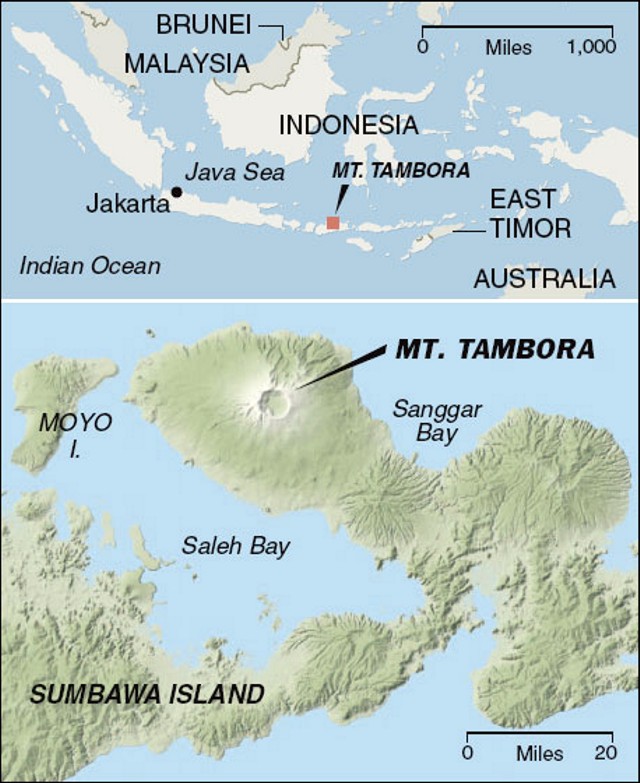 The eruption began on April 5, 1815, and lasted several weeks. The height of the eruption occurred on April 10th when the mountaintop blew, with major eruptions continuing through July of that year.

The explosion ejected approximately 31 cubic miles of ash and was rated a Volcanic Explosivity Index of 7 due to its destructive effects.

Pyroclastic flows from the eruption reached the sea on all sides of the peninsula, and heavy tephra fall devastated the island and surrounding islands. The eruption also caused tsunamis in the surrounding area and formed a 6-km-wide, 1250-m-deep caldera, and produced global climatic effects.

Throughout the region, ash rained down for weeks. Houses hundreds of miles from the mountain collapsed under the debris. Sources of fresh water, already scarce, became contaminated. Crops and forests died. The smoke and ash from the eruption circumnavigated the Northern Hemisphere and caused "the year without a summer" in 1816 where average temperatures in the Northern Hemisphere dropped a full degree Fahrenheit due to the dust in the atmosphere.

The volcanic winter that followed the eruption caused crop failures, food shortages, and flooding for most of North America, Western Europe, and parts of Asia. According to historical climatological sources, the death toll on the island was approximately 11,000 from pyroclastic flows and more than 100,000 from the resulting food shortages over the following decade. According to NOAA’s Earth Systems Research Laboratory (ESRL)’s homeschool-friendly 6-12 grade worksheet on volcanic eruptions, “[in] New England, snow fell in July of 1816, and temperatures reached the 30s.”

Some believe that Mary Shelley's inspiration for her famous book Frankenstein is rooted in the global weather effects of the eruption of Mount Tambora. Shelley spent time during the summer of 1816 vacationing with Lord Byron and others in Switzerland. Lord Byron was an English poet, and the summer was unseasonably dark and cold. His poem "Darkness" described the summer as the “bright sun was extinguish’d” and “Morn came and went—and came, and brought no day.” Lord Byron challenged his visitors with writing their own macabre stories, and Shelley ended up writing Frankenstein. This account has been criticized over time and may or may not be her inspiration for the book.

Blast from the Past

Did a volcanic eruption in Indonesia really lead to the creation of Frankenstein?