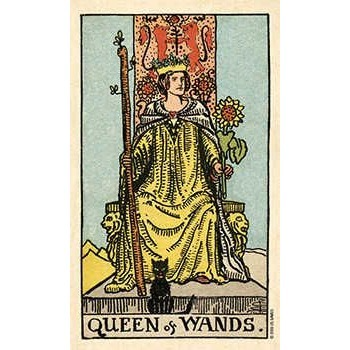 How to Interpret the Queen of Wands

All of the court cards in the Tarot can be interpreted as an actual person, known to the reader. In other cases, the card may reference certain qualities belonging to the royal depicted on the card.

... a powerful, confident, firey woman who is both strong and wise. She is an extroverted socialite and loves being the center of attention

The Queen of Wands is a powerful, confident, firey woman who is both strong and wise. She is an extroverted socialite and loves being the center of attention, but the Queen also has a hidden or unknown side — as is symbolized by the mysterious cat at her feet and the cryptic smile on her face.

She is highly focused on her objectives, and is not hesitant to use the full range of her powers to achieve her goals.

When not referencing an actual person in a tarot reading, the Queen of Wands typically points to certain approaches to a situation or past and future events which exemplify the Queen's character:

The card often signifies a bold and fearless approach to a situation. It carries an emphasis on social contacts and succesful leveraging of connections.

As a highly intelligent and influential woman, the card points to success at bringing others around to one's point of view, or gaining followers to an idea.

Lastly, the black cat points to a mysterious side to the card — possibly indicating a time of hidden emotions and circumstances.

Generally speaking, the Queen of Wands is a very positive card. It indicates a bold and successful approach; where insight, social ability and deeper intuition combine for stong decisions. It carries overtones of strong management, good investments, job advancement and wise parenting.

The Queen of Wands Inverted

The reversed Queen of Wands card may have several possible interpretations.

No matter how outgoing and social someone is, there are times when a period of quiet introspection and soul-seeking is needed ...

One common meaning is of an introverted period for an extroverted person. No matter how outgoing and social someone is, there are times when a period of quiet introspection and soul-seeking is needed — if not necessary.

The appearance of the reversed Queen of Wands may point to such a time. Or it may serve as a gentle warning that someone is spending too much time socializing. All that time being out-and-about is causing a disconnect with something inside. A little alone-time may be needed to correct that imbalance.

The inverted Queen of Wands may also represent someone who pursues a social or a "connections oriented" solution to problems. The card invites us to question whether or not that direction is the best approach.

"Created via: Web app"
Boris Borisovich created this topic on 11 Feb, 2022
Edits made to:
Infobox (+1 properties)

The Meaning of the "Queen of Wands" Tarot Card